Where do I begin?! On September 26, 2013 I had one of the best moments in my life. I got the opportunity to give a car away to a family that truly needs it. Zender Ford where I am the Marketing & Internet Director and myself decided we would like to create a Facebook contest. Now as always, I wanted this to be a unique and different kind of contest. Something that I have felt very personal about is that many people/families in the world have a rough time and simply do not get the platform where they can truly share their story. Booom! #ShareYourStory was born. Basically in a nutshell, people would go onto the Zender Ford facebook page www.facebook.com/zenderford and write a story about them self or someone that they know. At that point, they could have their friends, family or co workers go onto the story and vote one time per day. This contest would last for 4 months.

How would the stories be selected? 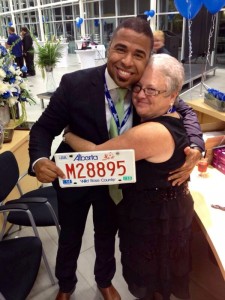 At the end of the voting deadline, September 1, 2013, we would take the top 10 stories with the most votes and subject them to a panel and shortlist to 5 stories that we felt were deserving. Apart of the selection process was a phone interview and background check that consisted of references and a credit check. I wanted to make sure that A. The people were legit and deserving of the vehicle and B. Everyone who had entered into the contest had a totally equal chance of being selected. Votes did not play a deciding factor, the content of the story was really what would make the difference, hense “Share Your Story”.

Did anyone see these stories?

Yes! Below is the numbers:

The Day that brought “The Moment” 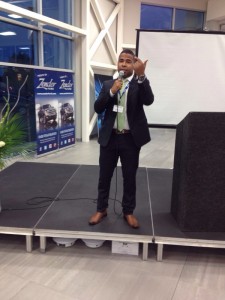 Wow! So on September 26, 2013 we had our Grand Re Opening at Zender Ford and the night started out amazing! The evening invited in one of the nicest sunsets that I had ever seen. I knew this was going to be an amazing night. I was asked to be the MC by the Zender family which was truly an honour. We executed the evening agenda and finallly! The moment of truth. I asked the Top 5 Share Your Story contestants to come up to the stage and select a key. Once they had selected their keys, the car slowly entered inside the showroom. 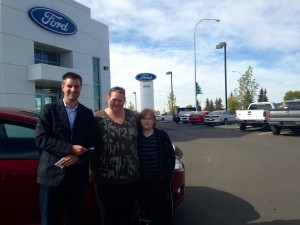 I explained the rules to the contestants and got the show rolling. The first key, no start, second key, no start, third key, no start, fourth key, no start……..the fifth key belonged to a lady by the name of Bonnie Grabbish. She could barely stand as she was in pure shock, to be honest, so was I. I looked into her eyes and seen a lady who had been through some of life’s most deepest and intimate struggles. Her son Darren had been in and out of hospitals and needed a liver transplant. He got one and lived to be an exceptional young man from what I could tell. 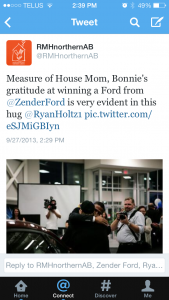 No! This moment gets better, Bonnie had spent a significant amount of time in a place that I call Heaven on Earth, The Ronald McDonald house. I was first introduced to this very loving place by a angel named Kristi Hammond. Wow, thank you! Kristi accompanied Bonnie to our Grand Re Opening as Bonnie felt a little out of place and was overall nervous about the event. Anyhow, that FIFTH key which belonged to Bonnie started up the car! It was offcial, the higher power of this world had spoken. A women, saint, angel,mother and friend had received a gift that would change her life forever!

Congrats Bonnie! I am your number one fan! Many blessings to you and your family.

If you would like to know more about what Ronald McDonald House North does then click here.