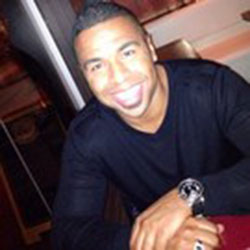 Ryan has been an outspoken and charismatic keynote speaker at various events, schools, conferences and is in high demand when it comes to anything inspirational, automotive, marketing & storytelling related storytelling-related. With a passion for storytelling, an obvious love for what he does, and his charming obsession with crazy socks, Ryan easily connects with audiences, clients, and his peers.

Suffering the huge loss of his mother who was a single Mom at 13 led Ryan to create his first business at age 18 out of survival. Ryan turned this devastating mess and pain into part of his motivation and message to inspire and impact the masses.

Fun facts: Ryan saved up his money from learning how to cut his hair at age 14. He then used his saved money to invest in his first real estate flip.

Ryan is a proud father of his king Daijon, queen Talia, rescued Pitbull Uma and husband to Nora and loves spending time with his family at their #TeamHoltz HQs in British Columbia & Alberta.

Reach out to Ryan and his team here to discover how you can UNLOCK your full potential.